We headed to Chicago for the 33rd Annual Cubs Convention at Sheraton Grand Hotel off Michigan Avenue at the end of a cold January. But winter in the Windy City doesn’t scare us. We’re veterans. 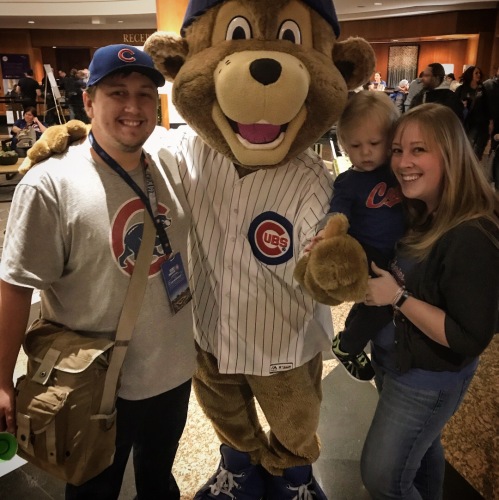 Passes for the Cubs Convention sold out quickly. We were some of the lucky fans who scored the hotel package for two nights back in November. The deal comes with two passes to the convention and overnight accommodations. Our son is still young enough to not count as an adult – and I do not look forward to the days when we have to buy an extra ticket for him! The passes are valid for the entire weekend, including the opening ceremony and dozens of opportunities to meet players (current and retired), hear them swap war stories and if you’re lucky, get an autograph. 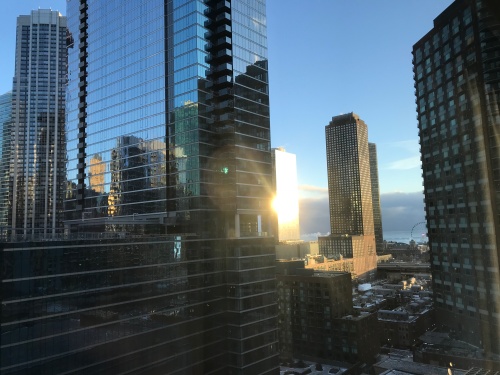 My husband packed a boatload of baseballs just for this occasion. When we went down to the Blackhawks Convention last July, the pucks he brought filled up fast with signatures. Everyone at the convention received a pull tab when they checked in that determined whether they got access to a special autograph session with one of the bigwigs. Unfortunately, we both got duds. We didn’t let that get us down. There’s plenty of opportunities to run into players around the convention. He got a total of seven signed baseballs over the weekend, including Justin Grimm, Mike Montgomery, Ron Coomer and my personal Dancing with the Stars favorite: David Ross.

Since we’re traveling with our two-year-old, we upgraded our room to a suite. When we retire for the evening, our toddler sleeps in the bedroom and we stay up to watch a movie, enjoy room service and not worry about a crabby child the next day. It’s also totally worth staying at a hotel near the convention so we have a place to retire to during the day for nap time. River North Chicago has no shortage of excellent hotels. We’ll consider staying at the Loews across the street next year, but the best deal is to purchase the room and convention pass package at the hosting venue. 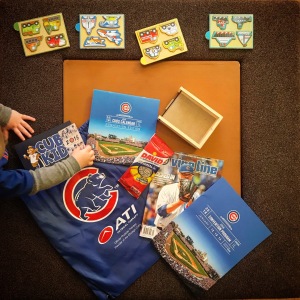 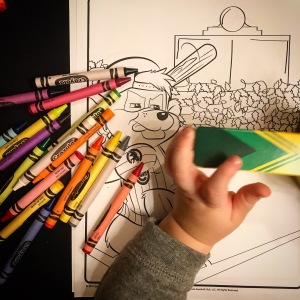 While it’s not the easiest to entertain a toddler at the Cubs Convention, the event is super kid-friendly.

Organizers put forth extra effort for families with young fans, including several kids-only autograph opportunities and a bonus Cubs Kids Room where children can try on real baseball uniforms, learn more about Clark’s Crew and take a color break. I think one of the highlights of the convention is the kids-only press conference where a bunch of little ones lined up to ask players questions. Many of them were smart and asked if they could get their picture taken or ball signed. I mean, who is going to say no to that? They also had an entire mock-field where kids could run bases, get their face painted and practice hitting balls. I know Leigh will love this as he gets older. He hung pretty close to me this year and I don’t mind one bit. Toddlers are pretty mobile, so I expected him to want to walk around and crawl under chairs. It’s no big secret if you have little or no expectations, you can’t be disappointed – a core philosophy of my parenting strategy. Leigh was all over the place, but he wasn’t super whiny or screaming so people didn’t mind the intrusion. Well, most people didn’t mind. There’s always one guy giving us the evil eye because his behavior is distracting. 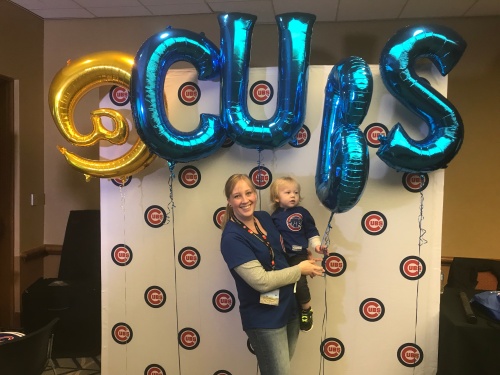 We listened to Morning Cup o’ Joe with Cubs Coach Joe Maddon, watched alum Ryne Sandberg talk about his glory days live on Radio 670 AM The Score and road the elevator with announcer Pat Hughes. It was like stepping into a Cubs Game in the middle of winter with thousands of super fans.

We loved our winter weekend in Chicago! It was awesome to show Leigh city we grew up in and we try to get down there every month. We want him to grow up with as much love for the Windy City as we did. 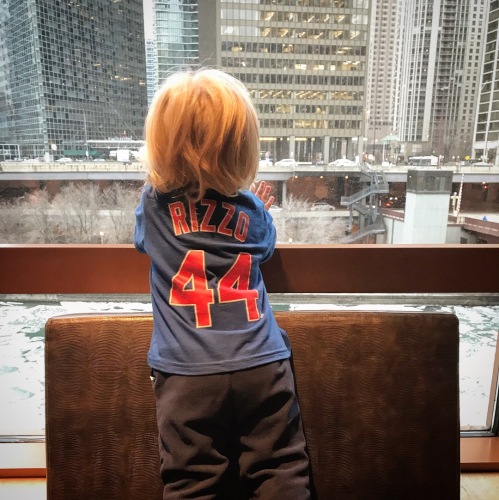 Something about Cubs Con (or any sports convention) you should know before you take your toddler with you – there’s lots of waiting. Long lines for autographs. Short lines for panel discussions. Some lines for food and even sometimes lines for escalators. It’s best to avoid the stroller and babywear. Leigh was not a fan of babywearing when he was younger, but I was so relieved to discover he moved on from that phase. He loves being carried around in our Ergo Baby Original carrier. We found it on sale at Target for less than $50. Our son is approaching 2-years-old and weighs north of 30-pounds. The carrier is rated for up to 45-pounds. I never thought I’d be the mom who baby wears her giant toddler, but just like McDonald’s says, I’m lovin’ it! I babywear him everywhere now, including our trips to the grocery store because he refuses to sit in the cart. 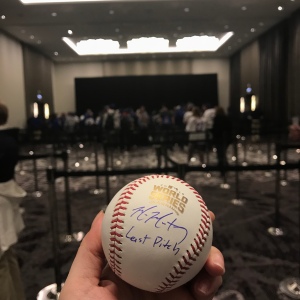 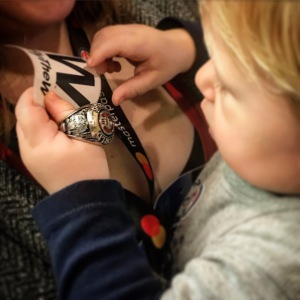 One of the best moments of the weekend was when one of the ushers saw Leigh struggling to maintain his cool. Without hesitation, he took off his 2016 championship ring and gave it to Leigh. We’ve seen them from afar on the hands of everyone in the organization, but never this close! Lots of ushers handed out W and Thats Cub stickers, but only one offered up his ring. Talk about going the extra mile.

The Arizona tourism booth sold us on Spring Training. We’re heading out to Mesa, Arizona at the end of February to see our favorite team at Sloan Park. Go Cubs, Go!

PS- If sports memorabilia is your thing, check out my husband’s latest venture on Instagram at CrackerJackPulls.

One thought on “Cubs Con”