Disclaimer: No, this is not a pregnancy announcement.

After an exciting year of baseball adventures with our son (Cubs Con in Chicago and Spring Training in Arizona), throwing a Cubs-themed party was fitting for his second birthday. We hosted a big 40+ friends and family in a rental space in celebration of his first birthday. It was a lot of work, stress and money. But this year we planned a more intimate party with the grandparents at our house. The house was full of family genuinely happy to be celebrating another year of Leigh. It was a lot more fun for everyone, including me.

Leigh loves baseball – it’s one of his favorite words. His baseball hat is his number one accessory and he wears his Wilson glove around like it’s a bracelet. He’s already been to more games than I can remember and he’ll even watch a few innings on the tv with Dad to relax. Soon enough, he’ll be reaching for an Old Style with his rally cap on, rooting for the home team. But for now, he’s still a toddler and we’re going to celebrate it just like Ernie Banks said, “Let’s play two!”

Since there’s still snow in the forecast at the end of March where we live, we planned for everyone to hang out inside our modest home. We left out all Leigh’s favorite toys, including his new t-ball set. He showed everyone his batting skills when he took on a Chicago Cubs pinata. I wanted him to be able to run around and enjoy himself without me telling him to stay close. He can do whatever he wants at home!

Our parents enjoyed watching Leigh open presents. Last year, I had to open all the gifts for him while he sat and watched. This year, he couldn’t even wait for people to get in the door to tear the wrapping paper off a new Brio farm train set. Leigh led my dad hand-in-hand to the living room and begged him to open the set. The best part about hosting his party at home was I didn’t have to worry about leaving the toys in their boxes. We opened them all on the spot and without worry. 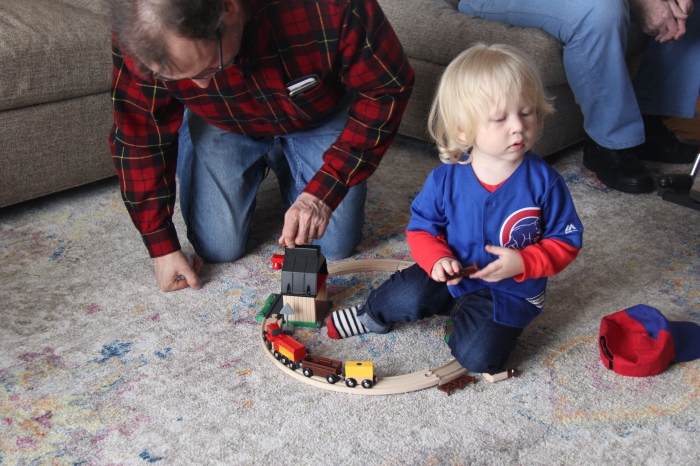 One of our favorite things to get a Wrigley are nachos, so we prepared a homemade nacho cheese sauce in the Instant Pot and spread out a variety of toppings, including Leigh’s favorite: sliced black olives. To make things stress-free, we ordered pizzas and salad from our local pizza shop and had them delivered. We had Chicago-style hot dogs, too. I’m proud I spent zero time making food in the kitchen during this party.

I prepared four dozen cupcakes with homemade baseball and grass buttercream frosting, as well as white chocolate-covered Oreo cookies, decorated to look like (you guessed it!) baseballs. Leigh helped me with the frosting. He’s very generous with his time and didn’t complain about eating a bunch of butter and sugar first thing in the morning. Nice guy.

It was a beautiful day. Instead of running around getting things ready for a big party, I got to enjoy this one with my son. There’s plenty of time for elaborate parties with all his friends. I’m glad we spent time with our parents celebrating two years of long blonde hair, eyes that speak to your soul, authentic belly laughs, warm snuggles, long nights (and a few short ones), endless energy and the cheesiest smiles you’ll ever see.

Singing happy birthday was my favorite part of the day. Leigh’s been practicing so he knows the birthday song routine. Everyone sings then he gets to blow out the candle and everyone claps. It’s so adorable, we had an encore performance before digging into the cupcakes. 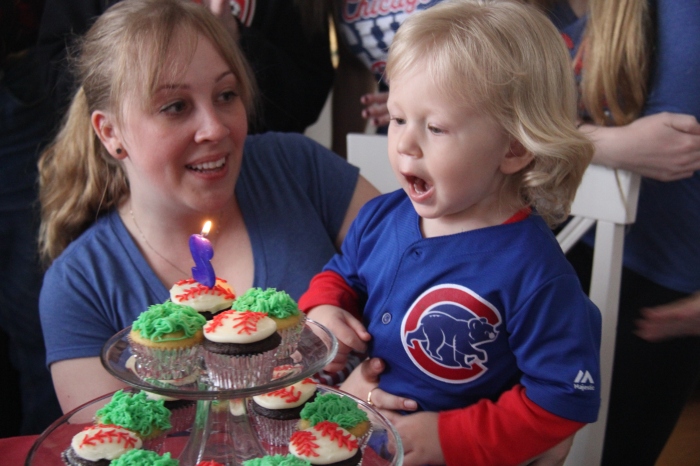 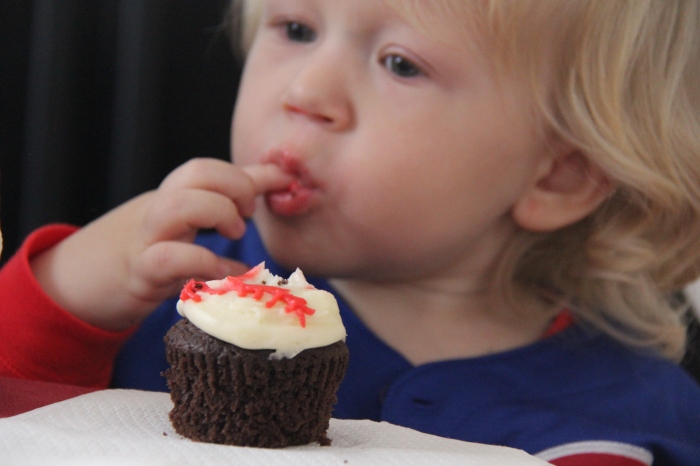 Everyone went home with a goody-bag filled with peanuts, Cracker Jack, chocolate baseballs and Leigh’s very own Topps baseball card. My husband is a big baseball card collector and he jumped at the opportunity to create this special keepsake. I love a unique guest book. We had a fingerprint tree at our wedding, a hockey puck for everyone to sign at his first birthday party and this year all the grandparents had to autograph his baseball. Leigh’s been wanting to draw all over the baseball ever since, but one day he’ll appreciate the sentiment. 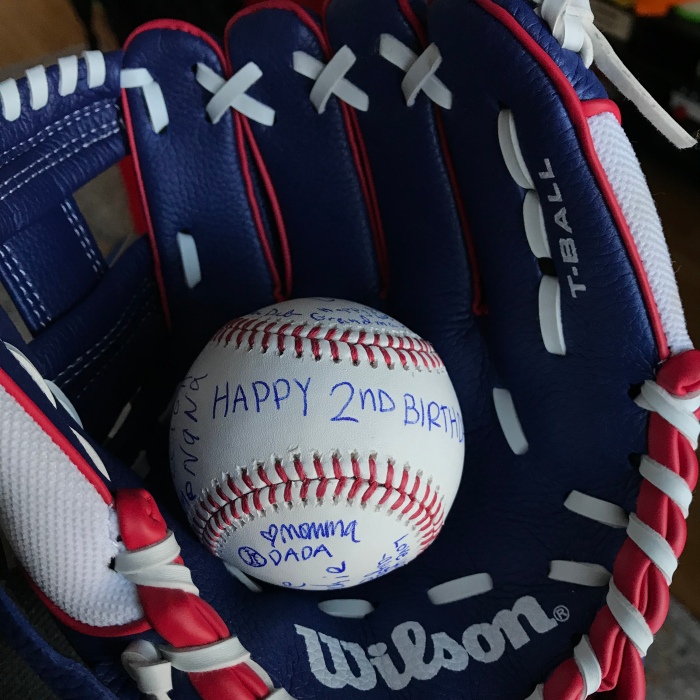 It’s been such a pleasure watching Leigh grow into a toddler. He’s smart, kind, thoughtful, creative, analytical and determined. We took his birthday day off work and went down to the Peggy Notebaert Nature Museum in Chicago. It’s the perfect hands-on destination for kids his age. We went on a free admissions day for Illinois residents in the middle of the week, so we also found free parking in Lincoln Park – SCORE! Leigh’s mind soaks up everything like a sponge. He’s got new emotions he’s trying to work through and I think it’s just a glimpse at what’s the come in the next year. But every day with him reminds me of what I was put on this planet to do. 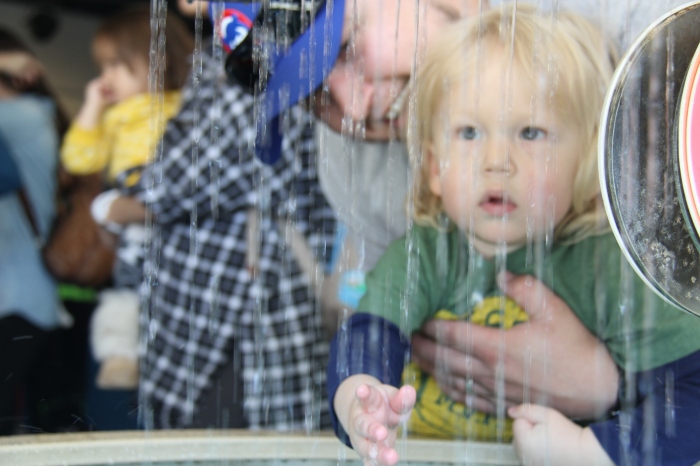 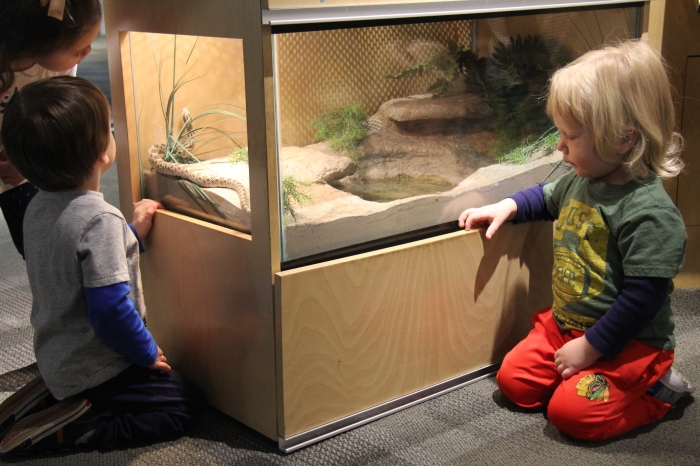 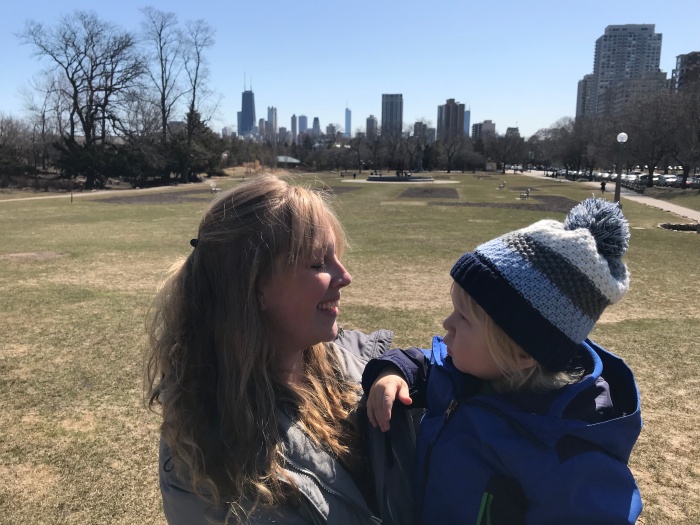 Don’t let anyone tell you two-year-olds are terrible. They are funny, sweet, curious and kind. (Yes, they are a handful, but you’ve got this.)

One thought on “Let’s Play Two”