Skip to content
Posted on August 18, 2019 by Lindsey Nemcek

We drove more than 700 miles round trip to watch our beloved Chicago Cubs play the Reds at the Great American Ball Park in Cincinnati, Ohio over the weekend. It was a long road driving down Route 65 through Indiana, but we made it in one piece with a three-year-old who refused to nap in the car any longer than 20 minutes each way. (Just trying to keep it real.) 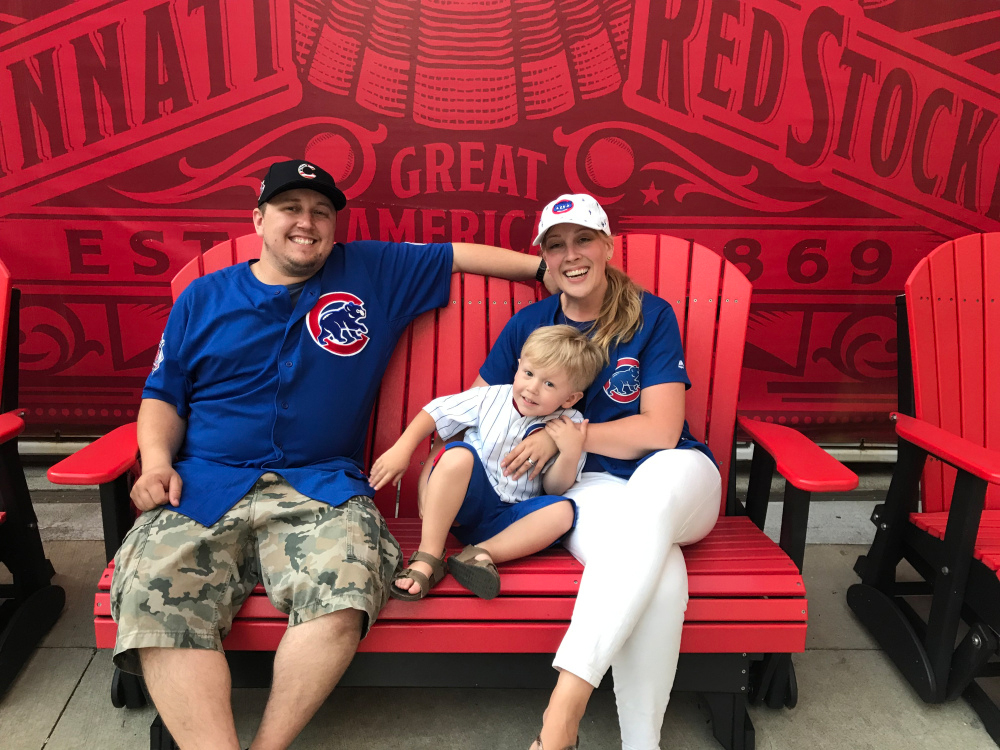 We dream of visiting every baseball park, starting within driving distance. The Cincinnati Red Stockings baseball team celebrates 150 years as the first professional baseball team. They transformed the game from a social-club pastime to a pro-sport when they hired a salaried team in 1869. We thought this special occasion was enough to warrant a road trip!

While I originally thought it was named “Great American Ball Park” because Cincy has the oldest baseball team, I quickly realized it was just another corporate name after seeing the skyline. From the bleachers, you can easily spot “Great American Insurance Group” on the tallest building. Located on the winding banks of the Ohio River just north of the beautiful Roebling Bridge, this ballpark opened in 2003 and seats north of 42K fans. We saw more 31K and 39K people pack the stands at the games we attended (a mild mix of red and blue, I may add). Cubs fans really do travel! We were not alone with our blue jerseys and everyone’s baseball cap had some design of the letter “C.”

If you have extra time to kill before the game, stop by their Hall of Fame and Museum ($12 for adults, kids are free). It’s a nice recap of the franchise history and really sets the stage for the game you’re about to watch. And you get a nice Reds bobblehead at the end before exiting through the team shop where Leigh picked up an adorable Rosie Red Lego mini-figure. There’s a pretty neat bronze statue of a pitcher, hitter and catcher at home plate just outside the park. It’s worth pausing to check out.

Inside the ballpark, there’s a glorious selection of craft beers, including my favorite Taft Brewing Co. They had an “All You Can Eat Stand” where you pay $20 and get hot dogs, chips, peanuts, popcorn and soft drinks but we kept our calories and cash for unique Cincy foods. This sometimes remorsefully included Skyline Chili, Frisch’s Big Boy, Graeter’s Ice Cream (you’ve got to try their signature Black Raspberry Chocolate Chip) and Larossa Pizza. Boy, we eat a lot at ball games. Leigh got his hands on the usual: peanuts and cotton candy. We stuck around for the free fireworks show after Friday night’s game. We had a spectacular view from our seats and it let us avoid the rush of crowds leaving right after the game.

We scored surprisingly affordable seats three rows back along the third baseline for the first game and had such a great time, we went back for cheap seats the next night. The Cubs lost both games we attended, but they won the first and last in the series so things evened o 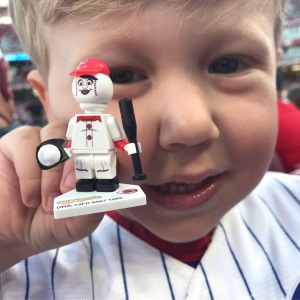 ut. We managed to get our hands on some game-used balls from their Authentics store, the traditional keepsake my husband gets at every game he attends. Although, we never did find a Mr. Redlegs Lego mini-figure. Rosie is doing just fine without him. Raise a hand for all the single ladies!

Being a social media marketer, I fell in love with their Mr. Redlegs bench campaign. The Reds stationed bench statues with their beloved mascot at iconic places around the city. We couldn’t help but take photos at the ones we spotted in Covington, Union Terminal and Findlay Market! There are more than 20 destinations to be found. And this is why our son fell in love with Mr. Red – he’s got a baseball for a head after all! Clark the Cub has some stiff competition.

Since we drove all day to get down to Cincy, we only had a few minutes to relax in our hotel room before heading to the game. We stayed in a corner king across the river at the Cincinnati Marriott RiverCenter in Covington, Kentucky. It has a great view of the riverbank with the ballpark and Roebling Bridge! Luckily, we found a shuttle trolley to drop us off a block from the ballpark and take us back for only $1 per person each way (kids are free). Saved us on parking and Leigh loved the novel adventure of riding on a bus!

If you’re a history buff, you’ll love visiting the Cincinnati Museum Center at Union Terminal. The old train station underwent an extensive renovation in 2018 and is home to the Cincinnati History Museum and Museum of Natural History & Science, plus there’s a children’s museum, OMNIMAX theater, holocaust and humanity center and library with digital archives. But the beauty of the experience is all about the building. It’s the largest half-dome in the western hemisphere and it’s decorated with mosaic tiles. It happened to be 1940s day when we went so the place was decked out with old cars, people dressed in 40s attire and swing dance lessons. There was even a Cincinnatti Warbirds flyover! I say this with excitement but Leigh literally yawned as they slowly flew over the building. It takes a lot to impress this 3-year-old.

Even if you aren’t interested in buying tickets to the museum, you could stop by for a scoop of Graeter’s ice cream in their Rookwood-tiled ice cream parlor. It’s a few steps to the right as you enter the main dome. The space was once a tea room when it originally opened in 1933. You’ll find the impressive original Rookwood Pottery tiles in the booths and on the walls. I fell in love with the design. You can also spot the awesome dinosaur skeletons from the windows while you snack – totally kid-friendly and doesn’t cost a dime unless you buy ice cream!

Before we left Cincinnatti, I had to visit a local farmer’s market and I had no idea what we’d find at Findlay’s Market on our way out of town. Located in Over-the-Rhine, the indoor market is open year-round with a seasonal farmer’s market outside. I thoroughly enjoyed wandering the shops, checking out local purveyors and people watching. We picked up Cincinnati spices from Colonel De, artisan chocolates at a neighborhood shop and a new air plant I’m fondly calling Rosie. 🙂 And we found another Mr. Redlegs statue Leigh wouldn’t stop hugging!

Feeling spontaneous, we decided to make it a REAL baseball weekend and take an extra 1.5-hour detour to Louisville and see the Slugger Museum and Factory. While the giant baseball bat out front made a big impression on Leigh, nothing compares to seeing the Big Leagues Little Bricks Lego statues of baseball hats and stadiums. Our master builder is now on the hunt for lots of blue Legos to construct his own creation.

We could have filled even more days with adventures in the historic city of Cincinnatti, but we were happy to return home after 72 hours with new memories of another ballpark. Cincy is definitely underrated! And if you’re looking for a history lesson, read more about why Cincinnatti is called the Queen City here. 😉

One thought on “Baseball in The Queen City”